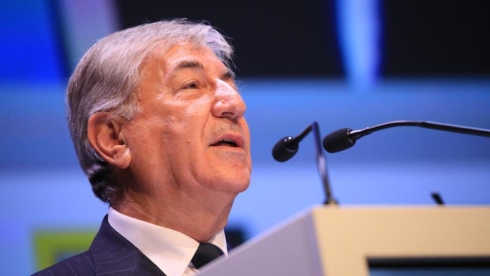 On the occasion of the “Assises de la mer” held in Brest on 27 and 28 November, Karmenu Vella, European Commissioner for the Environment, Maritime Affairs and Fisheries, spoke on the topic of Growth blue, which he described as a “driving force for Europe”. He reiterated the position of France ranked 4th in Europe in the Blue economy, according to a recent OECD study and welcomed the French strategic directions. He also welcomed the good results of the French fishing industry whose value increased by about 30% over the past 8 years. He praised the work of French fishermen, “concerned with the sustainability of stocks & assets in improving their management. ” He indicated, for example, that “Thanks to these efforts, sole will be fished sustainably in the Bay of Biscay & East Channel. This hard work pays off, he concluded. Fishing remains a priority for the European Commission. In the context of Brexit, it will have to be part of a new agreement by 2020. What will be the impact on the common fisheries policy? Sea to sea asked Commissioner Vella some questions:

Sea to sea: The Brexit does he not risk jeopardizing the general objectives of the CFP and the sustainability of fisheries (MSY, OD …)? What commitments can the Commission get from the United Kingdom?

Karmenu Vella: Within the context of the future economic partnership with the UK, we will establish a new fisheries agreement on, inter alia, access to waters and quota shares. The draft political declaration endorsed by the European Council (A50) on 25 November sets out firm objectives on future cooperation with respect to resource conservation, which is essential given the scope of our shared stock to be managed jointly.

In the negotiations on this future fisheries agreement with the UK, who will be an important strategic partner for the EU in fisheries, the Commission will be guided by the same objectives and principles of the Common Fisheries Policy as in its negotiations with other third countries. In these negotiations, it will aim to ensure that the UK will equally respect the need for sustainability and protection of stocks and that in the context of the future fisheries agreement with the UK our own conservation mechanisms will be matched with similar measures to preserve fishing stock.

STS: Regarding the Landing Obligation to be generalized in 2019: how does the Commission see its implementation? Accompanying measures are they possible for multi-species fisheries?

According to this obligation, fishermen must bring to shore all catches of species subject to Total allowable catch (TAC) limits or Minimum Conservation Reference Sizes (in the Mediterranean). This will bring an end to the unsustainable practice of throwing unwanted fish back into the sea. Use of landed fish must be restricted to purposes other than direct human consumption, including fish meal, fish oil, pet food, food additives, pharmaceuticals and cosmetics.

We are working together with the Member States and industry to help address the challenges and overcome any difficulties. There are several flexibilities and a set of potential measures to facilitate the full implementation. These include more flexible use of quotas, an exemption from the obligation to land the fish that survive after being returned to the sea, and an exceptional allowance to discard a limited amount of unavoidable unwanted catches. The EMFF covers investments in selective fishing gears, in the improvement of port infrastructures and in the marketing of unwanted catches.

STS: What about the reform of technical measures?

K.V.: The proposal on new Technical Measures is another important step to reduce unwanted catches and eliminate discards, notably through better selectivity, and better protection for juvenile fish and spawning grounds. The proposal sets out the rules on what kind of fishing gear fishermen can use, when and where fishermen may fish, and includes measures to enhance the protection of marine ecosystems and marine habitats. Through a more regionalised approach, the revised regulation will give Member States, fishermen and other stakeholders the possibility to decide which measures to apply in their regions to achieve sustainable fisheries provided these are at least as effective as current measures.

The revision of this regulation is currently being discussed by the co-legislators. In the meantime, we will ensure that the implementation of the current rules on Technical Measures remains a priority, as they are fundamental elements to achieve our objective of sustainable fishing.

STS: What about the implementation of Multi-annual management plans?

K.V.: Since the adoption of the CFP reform, the Commission has proposed five multi-annual plans (MAP) to achieve sustainable fishing. The Baltic Sea plan has been adopted in 2016 and the North Sea plan in 2018: the two plans are already in force.

Three further MAPs have been proposed by the Commission and are currently on the table of the co-legislators: the Adriatic Plan for small pelagics (tabled in February 2017) and the Plans for the Western Mediterranean and for Western waters (both tabled in March 2018).

Article suivant
We use cookies to ensure that we give you the best experience on our website. If you continue to use this site we will assume that you are happy with it.Ok